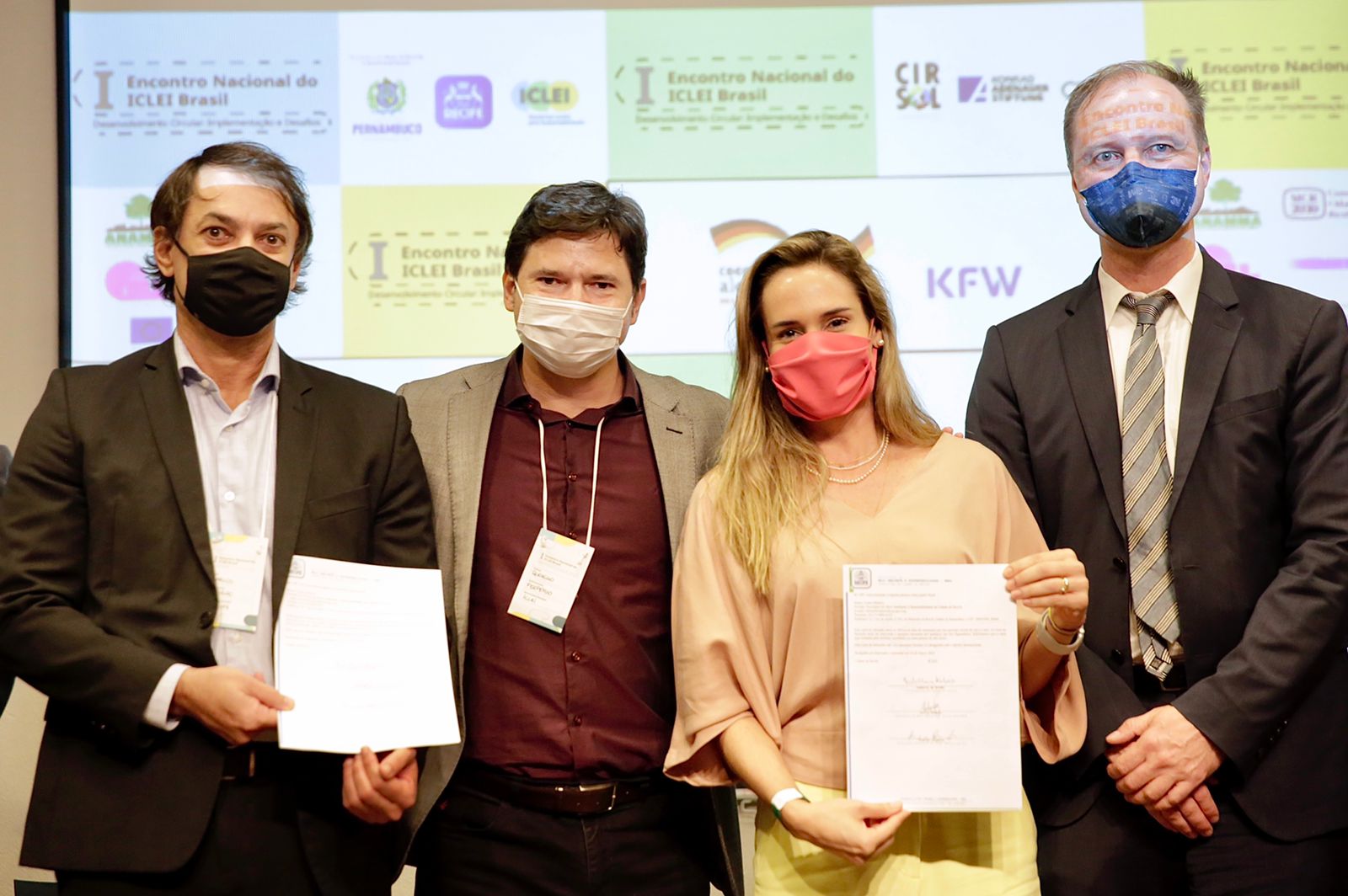 Mayor João Campos and Deputy Mayor Isabella de Roldão signed a Letter of Intent to the UIIF project, an initiative led by ICLEI and financed by the German government, through KfW, on behalf of the BMZ

Recife, the 16th most vulnerable city to the effects of climate change according to the Intergovernmental Panel on Climate Change (IPCC), will be the first in Latin America to participate in a project to create insurance against climate disasters. This Wednesday (16), during the 1st National Meeting of ICLEI Brasil and with the presence of the Director of KFW – Development Bank of the German Government, Martin Shröder, the Vice Mayor of the City of Recife, Isabella de Roldão, signed the Letter of Intent for joining the ProUrbano – Urban Infrastructure Insurance Facility (UIIF) project. The document was also signed by the Executive Secretary of ICLEI South America, Rodrigo Perpétuo, and endorsed by Mayor João Campos the night before (15), during the Meeting of the Regional Executive Council for South America of ICLEI (RexCom).

The main action , led by ICLEI – Local Governments for Sustainability and financed by the German government, through KfW – Development Bank on behalf of the Federal Ministry for Economic Cooperation and Development (BMZ acronym in German), is to support the creation and access to insurance as part of disaster risk strategies in Latin American cities. The UIIF is part of the Global Insurance Partnership for Resilience, or InsuResilience (IGP), and aims to support municipal governments in protecting critical urban infrastructure and vulnerable populations from natural disasters caused by extreme weather events.

The Executive Secretary of ICLEI South America, Rodrigo Perpétuo, highlighted that Recife was not selected for the project, but chosen because of its permanent, firm and long-standing climate commitment. “We need to ensure that cities are prepared and given the necessary support for resilience through insurance market development and infrastructure. And there is no better city to receive this project in a pioneering way than Recife.”

When thanking the choice of Recife for the ProUrbano experience, Isabella Roldão highlighted that it is an innovative insurance, but probably will become the most consumed in the world. “The feeling is one of gratitude for having been chosen consciously. At the same time, it makes my heart ache to know that Recife was not chosen by chance. We are extremely vulnerable to climate change and this cannot be left out of our focus. The impacts of climate change have gender, color and class. And we need to take important actions to ensure minimal harm to people.”

Meanwhile, the mayor João Campos assured that his team will be committed to the project in order to  model the insurance. “Recife is the first city to sign and take part in Latin America and, therefore, we have an obligation to make it work. Showing that this is a path that strengthens our city is our commitment”, said the Mayor.

Shröder highlighted that KFW was working with more focus on the climate mitigation axis and that, with the initiative, it takes a step forward in the field of adaptation. “We seek to give impulses through innovation. Where to put scarce resources smarter? In the insurance world, this is a field that has not been worked on yet and it is fascinating to start this project”, said the Director of KFW.

The big challenge for cities is the financing of adaptation measures, added the president of RexCom, ICLEI Special Envoy for Latin America and Secretary of Economic Development of the State of Pernambuco, Gerlado Julio. “It’s a challenge that has been set and everyone is studying and learning. This is an innovative project and could be the path to adaptive and resilient infrastructure.”

More about the project

The UIIF is coordinated and implemented by the ICLEI World Secretariat (ICLEI World Secretariat, or ICLEI WS), the ICLEI Secretariat for South America (ICLEI SAMS) and the ICLEI Secretariat Mexico, Central America and the Caribbean (ICLEI MECS), which will work together to establish regional insurance services by 2025. Technical support and financial subsidies provided by the UIIF are limited to municipal governments that are capable and committed to exploring the potential to include climate risk insurance solutions in their own strategies and framework Municipal Disaster Risk Management Department.

With the expression of interest in participating in the UIIF, Recife will be able to receive technical and financial support to access urban insurance coverage against increasing risks caused by extreme weather events, through the development of tailor-made insurance products. Over the course of 1 year, the capital of Pernambuco will dialogue with insurers, financial institutions, organizations and government departments, in order to facilitate the assessment of the city’s exposure to natural disaster risks and the understanding of relevant legal, political and financial conditions, as well as as well as existing gaps in disaster risk financing.

Recife is internationally recognized for its resilience measures

In addition to signing the Letter of Intent, during the session “Resilience and adaptation in Latin American cities – the case of Recife”, the city was also honored for being recognized as a Resilience Node by the Global Coordinating Committee of the Building Resilient Cities 2030 initiative ( MCR 2030), of which ICLEI is part. Resilience Nodes are cities that demonstrate political and technical commitment on taking action to address climate disaster risks, becoming more inclusive, safer and more sustainable. In addition to Recife, only Medellín and Campinas were recognized as Resilience Nodes in South America.

Carlos Ribeiro, Secretary of the Environment of the City of Recife, recalled the progress made by the municipality in the climate trajectory, whose first Inventory of Greenhouse Gas Emissions (GHG) was launched in 2015. The city of Recife is recognized worldwide as a pioneer in public measures climate action. Associated with ICLEI since 2015, it has worked in a series of initiatives, such as the two phases of the Urban-LEDS project, which helped in the implementation of climate governance (Committee and Executive Group on Sustainability and Climate Change – Decree nº 27.343/2013) . The partnership also resulted in the preparation of inventories of greenhouse gas (GHG) emissions, the GHG Emissions Reduction Plan (2016); Analysis of Climate Risks and Vulnerabilities and Adaptation Strategies (2019); the Local Climate Action Plan (2020); and the installation of photovoltaic panels at the Hospital da Mulher do Recife (HMR) and the Centro Educativo do Econucleo da Jaqueira, focused on climate education (2021).

The role of the private sector

The session also included reflection on the role of the private sector in building local resilience strategies. Thaís Morais Souza, Sustainability Specialist at MRV, Partner of ICLEI in 2022, highlighted that the company has among its strategic objectives to contribute to the advancement of climate adaptation in municipalities. “MRV’s intention, together with the ICLEI partnership, is to dialogue with the municipalities bringing vulnerability analysis. When building a new development, we are already able to show the municipality what the climate scenarios are for the neighborhood, such as water shortages, landslides, heat waves, etc.”